A Career Shift at 53

Posted on September 16, 2015 by Sandra in Case Studies

My client has agreed to have this case study published.  I have changed her name to protect her anonymity.

“I initially worked with Sandra to help me consider my next career move. With kindness and empathy, she actually started me on a journey of personal discovery that has made me realise how different my aspirations are now from 20 years ago, I’d just been too busy to notice. People keep saying how much happier I seem and how positive. As a result I’ve attracted new and exciting opportunities. Thank you Sandra, you’ve helped so much.”

Elizabeth was feeling stuck and even dragged down by her current job. She had enjoyed very little recognition and felt her leadership role had been played up at interview and the reality was that the job was much less about leadership and much more about clambering through red tape and navigating organisational politics.

Outside of work, Elizabeth felt that her long hours and resultant ‘busyness’ were causing life to whiz by with few opportunities to sit back and smell the roses. Most evenings she would get home later than planned, meaning that family meals were rushed and not as healthy as they could be. After cooking, eating and tidying up, it was quite usual for her to work until midnight. Her teenage daughter was going through exams and Elizabeth wanted to be there more for her.

Elizabeth had always felt as though she had never achieved her full potential at work, settling for roles that didn’t allow her leadership capabilities to shine, but she was now 53 and stress had taken over. Long hours, lack of sleep and her perfectionist tendencies eventually lead to exhaustion and burnout. It became imperative she ‘protect her health’ as she put it.

This was more than a career change for Elizabeth. This was a journey of discovery; an opportunity to work out what she really wanted, and how a new job would help provide that as well as offer a healthier, more fulfilling lifestyle.

Frustration, anger and resentment can create barriers to change as they inevitably cast their shadow over new horizons. It was important therefore that as well as focusing on her future, I help Elizabeth make peace with how she felt about her current job. I helped untangle her emotions from the politics and unmanageable workload that had resulted from inappropriate resources. This enabled her to gain perspective and leave work at work.

Alongside tackling her stress and creating freedom from the emotional baggage associated with work, I took Elizabeth through my career change process, using her values as the foundations upon which she would refocus her life and identify what she wanted next. We looked at her skills, and talents; worked on a life plan; prepared for possibilities; identified resources and made way for change. Like most of my clients, it was the first time in many years she had taken time out to really think about who she was and what she wanted from her career now.

For the first time, self care was a priority. At 53 her relatively unfit body had demanded attention. She bought a fitness bike and a juicer and most importantly she made a commitment to herself that her health and wellbeing was number one. Without her health she hadn’t been able to be her best self, either at work or at home in her role supporting her teenage daughter.

Through stress, her body was fatigued, but recovered relatively quickly due to the resources she had put in place after a session we’d had about health. The realisations that came at this time were exactly what she needed to get unstuck and create a new mindset around work.

Elizabeth and I explored her reasons for wanting to move up the corporate ladder. It had been an expectation she’d set herself after achieving outstanding academic results 30+ years ago. Her life had moved on and things had changed significantly since then. Looking at her current life with fresh eyes enabled her to embrace her new priorities and let go of what was no longer serving her.

Looking forward, she was able to see that making a difference using her particular set of skills was now more important to her than reaching the top of her profession. This realisation made it easier to focus her attention on roles in the Third Sector where she already had lots of experience. Having an impact here had always been close to her heart.

Elizabeth wanted a richer, more balanced experience of life and work, at a pace that felt easier and allowed more room for fun. We set about creating a powerful intention for these things, and ease and flow became her new mantra. 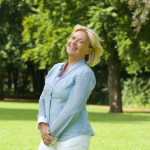 Every job application she made was successful and after two very near misses, she secured the perfect role working for a charity in striking distance from her home.

Her departing team asked her to stay on, offering flexible hours that made up the reduced hours she’d taken at the charity.

Just before her holiday this year, Elizabeth sent me an email. It was summarised by the following words.

“I now have a part time role that is challenging but not beyond me, which is what I wanted. I have a strange sense of calm that everything is going to be okay. There have been so many positives lately.”

As I was finishing off this case study I received a lovely handwritten letter from her, with a thoughtful gift from her holiday. In the letter she shared the leaving date from her current job and that she had been offered the opportunity to make up her part time hours at the charity to full time. With the right attitude and 100% clarity, setting intentions is very powerful indeed!

Has Your Work Mojo Up And Left? Get In Touch!