Overwhelm. You are not alone.

Posted on June 26, 2015 by Sandra in Blog, Midlife Crisis, Overwhelm 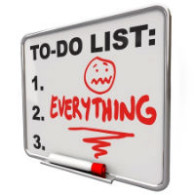 I had a shock recently. I realised I was ‘in overwhelm’.

What shocked me most, though, was the realisation I’d been ‘in there’ for at least five years. “Wait a minute,” I thought, “I’m a grown-up. I’m nearly 50. I’m a Life Coach, for heaven’s sake. This shouldn’t be happening!”

It’s not as though anything major tipped me over, either; no great crises, no sudden change of lifestyle. Life’s good. I’m a wife and mother to two young boys, living in a nice suburban semi within 15 miles of family. I have more really good friends now than I’ve ever had and run my own small business.

My life mirrors that of many of my friends.  So why was it that when I ‘confessed’ to being overwhelmed I saw a flush of recognition in their faces? Their relief was palpable (I even noticed tears spring to their eyes as they realised they were not alone).

At first I thought this might be a mainly female burden, due to all the roles women play in their lives; I was wrong.   Men know her too.

Overwhelm, it seems, is not fussy about who she sneaks up on.

How Does Overwhelm Show Up? 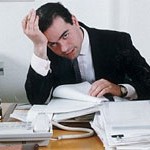 I’ve noticed there seems to be two ways overwhelm shows up.  The first is the sudden whoosh kind (yes, whoosh, it’s a technical term, you understand…)

This usually comes when you realise you’ve taken on too much and you’re paddling like mad just to stay in the boat, let alone make progress.  You hit a boulder and WHOOSH there you are, spitting out water as you struggle to keep your head above water;  the classic and acute sense of feeling overwhelmed.

Then there’s the kind I experienced; the chronic, nagging, hidden kind.  A business coach friend described it as “the kind where you realise you’re a fish in the water.  You don’t even know you are surrounded by it.”  The body has its own wisdom so, for me, this  finally manifested as chronic back pain.  One day I’d had enough of it and I was exploring how to soothe it when an exercise in The Mindbody Prescription by John E. Sarno was suggested to me.  The exercise centred around finding the route of the emotion associated with the pain.

And you know what? Since identifying the emotion as overwhelm, I’ve been pain free.

How does feeling overwhelmed showing up for you?

Why is Overwhelm So Common Now?

The most obvious answer is information overload; facing a constant onslaught of stimuli from our smartphones and other devices, there’s never on ‘off’ point.

But I think there’s another factor which may have started in the 1980s; the belief that we could ‘have it all’.  Remember when whoever had the biggest and the best was a winner? I wasn’t bothered by what I did or didn’t have in terms of material possessions, but there was a distinct feeling that if I didn’t display my wealth and achieve more than anyone expected, I must be a loser (and no-one wants to be a loser).

So, like many back then, I strived. We donned shoulder pads and emulated Maggie Thatcher; if a wife and mother from above a greengrocer’s can be Prime Minister, so can I, went the cry.

As women made their way up the ranks, men found themselves in new territory.  They were not only dealing with competition from their own kind but from women as well.  The need for ‘better’ stepped up a notch and everyone began pedalling like crazy trying to keep up.

A decade later and equality was becoming more accepted. Men and women found their feet, and the term ‘work/life balance’ emerged.  The first sign, perhaps, that pedalling like crazy has its drawbacks.

Now it seems many of us are suffering from the fall out of the last 30 years of constant, at times frantic, pedalling.  The much-touted ‘Work/life balance’ hasn’t worked (what is that anyway? Work and life are the same thing, aren’t they?) 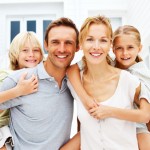 It’s really difficult to avoid comparing ourselves with others.  Looking to our friends and the people in our communities is perhaps the alternative to the celebrity culture we used to know.  Social Media  for all its positives, makes it more difficult to discern what’s real. I’ve discovered that if I’m feeling overwhelmed, Facebook is not the place to go, awash as it is with smiley faces, achievements and acclaims.

(Not to mention the ads that pop up every 5 minutes suggesting I’m not successful unless I’m earning a six figure income.  And by the way I could learn to do that in just 3 days, so what’s my excuse?)

The result? A naturally skewed sense of the truth.  It’s so easy to think ‘everyone else can cope, why can’t I!’

Being a grown up

Midlife stirs up emotion and makes us look at our lives from new perspectives; enough perspective to learn from our youth, enough energy to wonder how we’re going to apply that wisdom. There’s a renewed desire for self empowerment at this time.  Yet, do you ever feel like you haven’t grown up?

Being a grown up is about being responsible and with little support to ease the pressure we’re under to do, be and have it all .. that, for me, is overwhelm.

Can I tell you a secret? I don’t even want to have it all.  I never really did.  Yet I still felt a sense of duty around being a woman born of an era where we became more equal and independent, and everything that goes along with that. Men, I think, may still identify with the need to provide and protect.

It is only when we have the courage to face things exactly as they are without any self deception or illusion that a light will develop out of events by which the path to success may be recognised.

What to do about it?

I came to the realisation that I have a choice.  Choice is not about what should happen but what could happen.  Forget duty and what anyone else will think.  Easier said than done, I know!

I realised that my sense of overwhelm was indicating that some recent (albeit unconscious) choices haven’t gone so well.  I’d been trying to keep up with the image I thought everyone else had about me, only to realise that it was the image I had about me all along!

I had inadvertently bowed to the expectations I had placed on myself, based on old beliefs I’d formed back in the 1980s. I’d forgotten that I was never bothered about status or material things. Never. 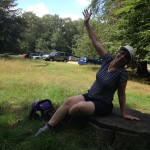 Remembering my true desire, which is simply to experience joy, connection and love, has been a huge relief.  When I brought my life right back to these fundamentals, the overwhelm fell away.  Ah, sweet relief!

So I’m curious; what are your simple needs in life? Maybe you’ve met them already, or resist the simple things, or believe there should be more?   Would reaching out for your simple desires mean making some life choices that would step you out of your comfort zone?

Bronnie Ware is an Australian nurse who worked in palliative care. She recorded her patients’ dying epiphanies in a blog called ‘Inspiration and Chai’, which gained so much attention that she put her observations into a book called ‘The Top Five Regrets of the Dying’. The most common regret was

I wish I’d had the courage to live a life true to myself, not the life others expected of me.

Makes you think, doesn’t it.

How I can help

I’ve developed a four week Freedom From Overwhelm live and interactive online tele-series.  It’s aimed at anyone who is feeling the stress of overwhelm.  Whether reading this blog has made you realise you have been suffering for years, or whether you’re in the process of dealing with a mini meltdown because something has happened, this course will give you the tools you need to manage where you’re at. Visit here for dates and more information.

There are genuinely limited places because we want it to be a personal experience, so don’t leave it too long.  Book by Friday 17th July and you’ll receive a whopping 25% discount!

If you would prefer to chat to get clear about what you want, please contact me to arrange a free 40 minute, no obligation conversation I’d love to hear from you.

You may also like to read Part Two where you’ll discover practical ways to relieve overwhelm.

Has Your Work Mojo Up And Left? Get In Touch!